Just yesterday, I was having a discussion with a trader who uses Abundance Trading Group’s discounts. He mentioned to me that he was slipped >20 pips on his stop loss order on a news event. He trades mostly on the daily time frame. I advised him on a various ways he could minimize slippage and this inspired me to write this post to share the knowledge with the world.

How to avoid or minimize slippage in Forex trading?

How to avoid or minimize slippage in Forex trading?

For example, if you trade NZDUSD on the daily chart, and you are expecting to hold your trades for a few days, then you should check the upcoming week for any non-farm payroll news, or any NZD or USD interest rate news.

Such interest rate news are as powerful and volatile as non-farm payroll news, so you should be aware that you could get slipped. If you are trading on the 4 hour or daily chart, it may be OK to keep your positions open during such high impact news because a slippage of 20pips is just a small percentage of your average profit target of 200 to 500 pips.

But if you trade 1 hour or below charts, it is best to avoid such news, by either closing your position, or waiting after the news to enter your trade. This is because a 20pip slippage is a large percentage of your profit. For example if you trade the hourly charts, you might have an average take profit size of 50pips. 20pips slippage out of 50pips is a big cost to you.

Why is there slippage in the first place?

Is it because my broker is cheating me? Well in some cases, yes. But in most cases, no. You see, during such high impact news, the market moves extremely quickly. When your stop loss order is hit, an order to close your position is ‘immediately’ sent to the market. The order takes 100 milliseconds to reach the market and by that time, the price may have moved 10 pips from your original stop loss price. This is how slippage occurs.

Alternatively, when your stop loss order is sent to the market and is matched with one of the liquidity providers (LPs). The LP then decides the market is moving too fast and rejects to fill your order. (yes they can do that, this is called last-look in Forex – read my article to learn more). Your order is then matched with the next LP who decides to fill your order. By the time the second LP fills your order, 1 second has passed, and the market has moved 20pips from your original stop loss price.

However, this is not to say that choosing no last look brokers will guarantee you get no slippage because in a fast moving market, during the 100 milliseconds the stop loss order takes to reach the market, the price may have moved 10pips against you.

2. Check the fundamental background of the currency pair you trade

I know this is on hindsight, but just let me share what could have been done to protect yourself. When a currency experiences massive devaluation (I’m not talking about EUR falling 2% (~200pips) against the USD in one day), but like the Rouble which fell 10% (~1000pips) in one day, you can expect that country’s central bank to defend it’s currency.

How? It can either start a massive buying program to prevent its currency from falling further, or it can raise interest rates by an astronomical amount to incentivise people not to sell the Rouble because of the massive interest they can gain, and the latter was what Russia’s central bank did. They raised interest rates from 10.5% to 17% on 16 December 2014 and it seems to have helped stop the devaluation of the Rouble. 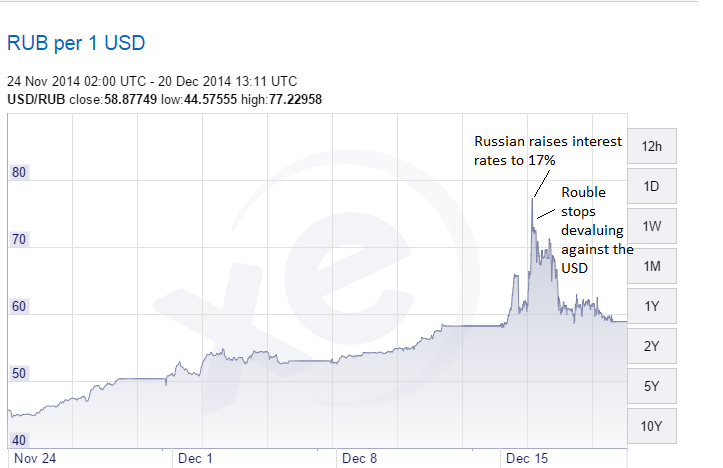 This may be a time bomb waiting to explode. Many brokers have already reduced their leverage on this currency pair to a max of 50:1 because of their expectations of massive volatility.

In 2011, the Swiss central bank (SNB) announced a floor of 1.20 EUR for 1 CHF. This means they will not allow the CHF to continue appreciating in value. Everything was alright until 2014 when the ECB announce its own version of the QE which mean massive money printing to ‘stimulate’ the economy. The side effect of this QE is that the Euro will be devalued because of increase in supply of money. The euro started to fall in value against the swiss franc (CHF) and now we are at a point where the 1.2 EUR is equals to 1 CHF (the swiss central bank floor).

The SNB says it will defend with unlimited purchases of foreign currency (to raise the value of other currencies in order to devalue it’s own). I think it is best to stay away from the EURCHF for now, unless you know what you’re doing. 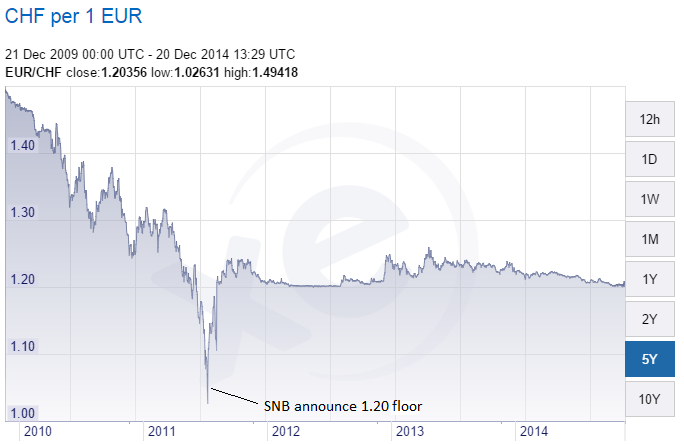 3. Trade with a broker that has a guaranteed stop loss

We all know there is no such thing in the real world (explained above in the section “Why is there slippage in the first place?“). How is it possible then?

In order for a broker to provide a guaranteed stop loss, they need to trade against you. This means if you win, they lose and vice versa. I think we all have read enough about how it is disadvantageous to trade with brokers who trade against you, but if you still want to go ahead, here’s how it works:

So that completes my guide on how to avoid or minimize slippage in Forex Trading. Feel free to discuss in the comments below!